Paralyzed at the peak of his career, Sandeep Singh led India to win the Hockey Cup after 13-years

Sandeep Singh Bhinder is a name that every hockey lover is fond of. Also known as ‘Flicker Singh’, Sandeep holds a drag flick speed record of over 145km/hr. But what makes the journey of this sportsman notable is the unfortunate incident which he had overcome after an unforeseen mishap.

Sandeep Singh, born on 27 February 1986, is an Indian professional field hockey player and an ex-captain of the Indian national team. He generally featured as a fullback and was a penalty corner specialist for the team. Sandeep made his international debut in January 2004 in Sultan Azlan Shah Cup In Kuala Lumpur.

Just within three years of his international career when the hockey player was at his peak, Sandeep was seriously injured after being hit by an accidental gunshot on the Shatabadi train in August 2006. He was on his way to join the national team which was to leave for the World Cup in Germany two days later. For the next two years, Sandeep Singh Bhinder was almost paralyzed and remained on a wheelchair. However, his determination to recover and establish himself back into the national team is what made his story motivating. 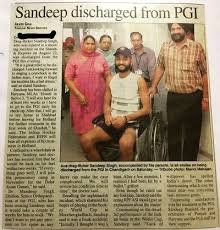 In 2009, Sandeep also went on to become the captain of the Indian national team. Under his captaincy, team India won the Sultan Azlan Shah Cup in 2009. This victory for the country was after a long wait of 13-years. Sandeep was also the top goal scorer of the tournament.

In 2012, Indian men’s national hockey team qualified for the Summer Olympics in London after a gap of 8 years. Sandeep’s achievement of scoring five goals in the final against France, including a hat-trick – all from penalty corners (19th, 26th, 38th, 49th and 51st minutes) was remarkable. Bhinder was the highest scorer of this Olympic qualifiers tournament with 16 goals.

Sandeep is currently out of the national team since 2014, although he has not given up his passion for the game. Being viewed as one of the best drag glints of the amusement, Singh currently holds a DSP rank in the Haryana police. He is also a recipient of the prestigious Arjuna award from the Indian government.

Last year in 2018, famous singer and actor Diljit Dosanjh essayed the character of Sandeep Singh in the movie titled Soorma.

An obstacle is often a stepping stone, and Singh displayed an ultimate example of how one can emerge stronger if he is undaunted by anyone, even if the opponent is life.