On the occasion of Pitrupaksha and Shraaddh (16–lunar day period in Hindu calendar when Hindus pay homage to the dead, especially through food offerings), members of Vaastav Foundation, SIF Karnataka, SIF Agra, SIF Daaman (under parent NGO Save Indian Family), who have been suffering at the hands of gender biased laws, organised a Pinddaan of relationships with their estranged wives in Nashik on Sunday, September 22.

What Does This #Pinddaan Depict?

Pinddaan is usually done for ancestors and relatives who are no more or believed to be dead. It is done after the death of a person or if a person is untraceable for long. This ritual signifies that the one who is dead is free from material world and on their journey towards moksha. More importantly, it is a therapeutic ritual, bringing closure to the person who is performing it. This tradition is believed to free the one performing it, from the relationship that they held with the deceased. 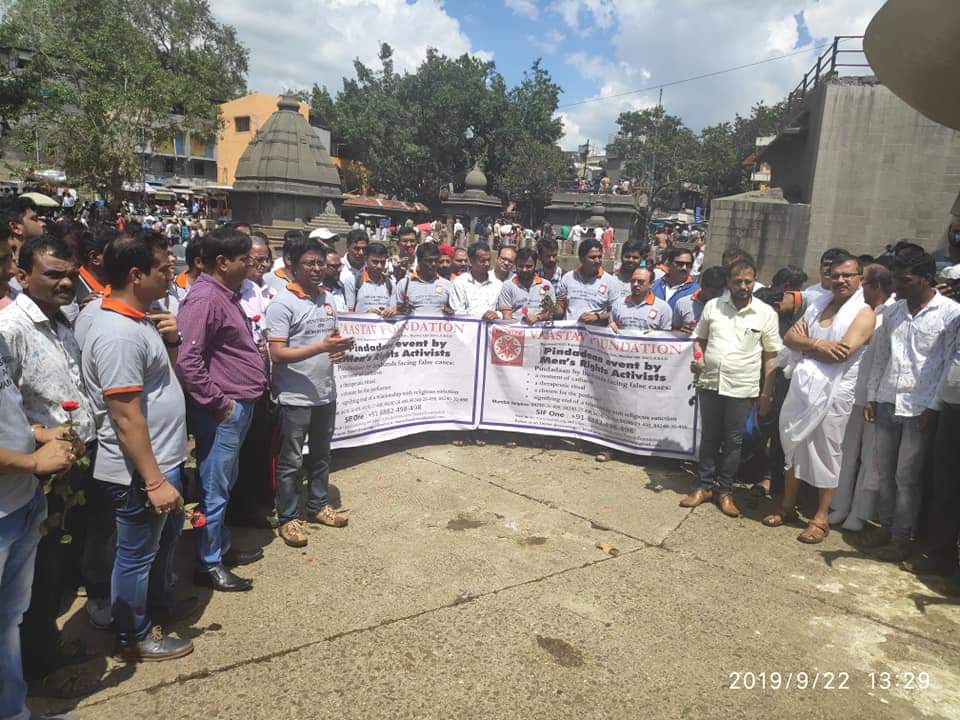 According to the NGO, this is also a way to raise their voice against Toxic Feminism that is completely suppressing the male gender in the name of #Equality. This initiative was undertaken across India in approximately 50+locations, including Bangalore, Kanpur, Agra and others, to spread awareness against the rampant misuse of women centric laws in India, to trap men and their families by alleging false accusations. All men that gathered at this event, are either being divorced and asked to cough up ransom in the name of Alimony, or have been fighting their cases in courts over several years. 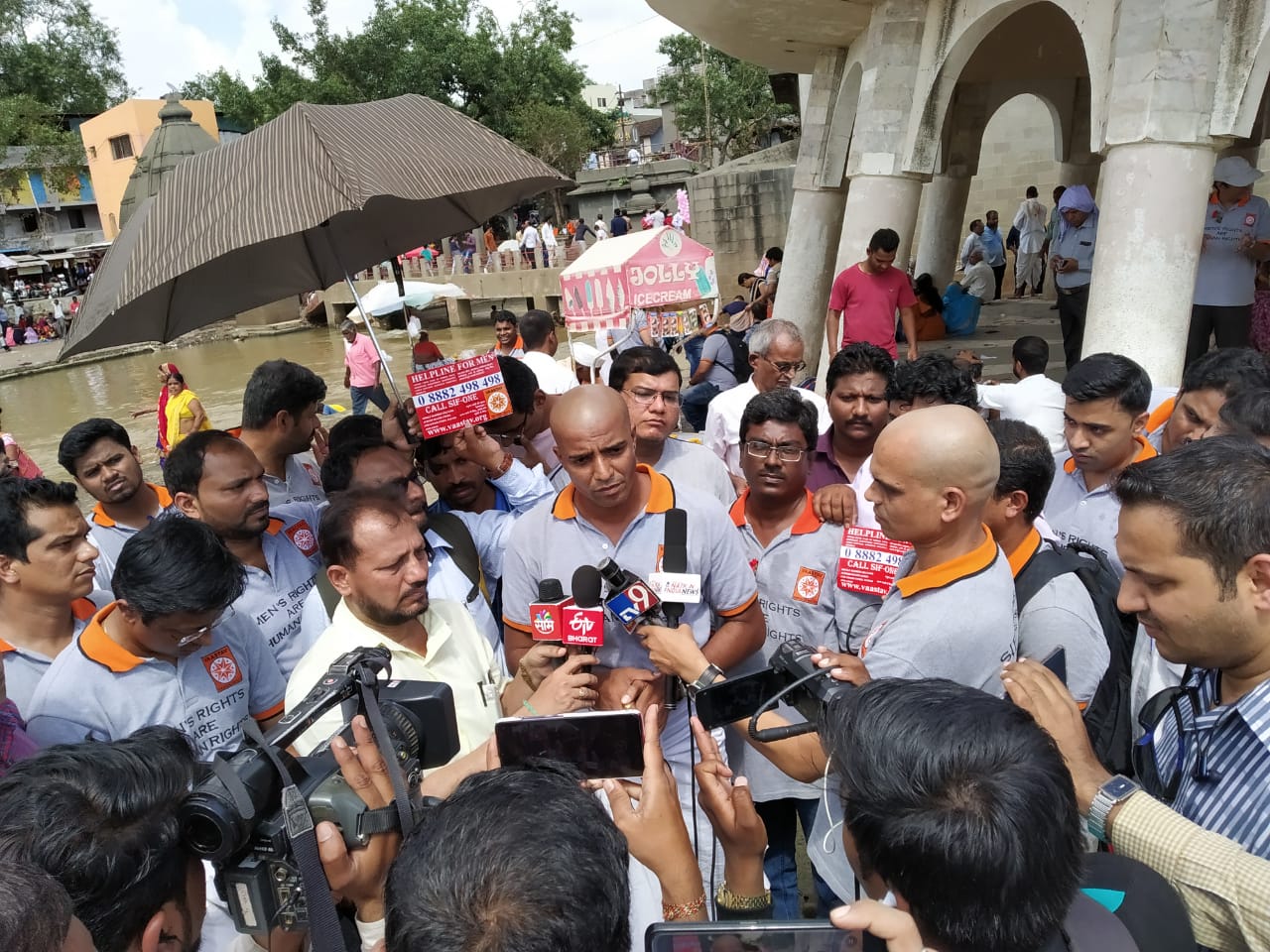 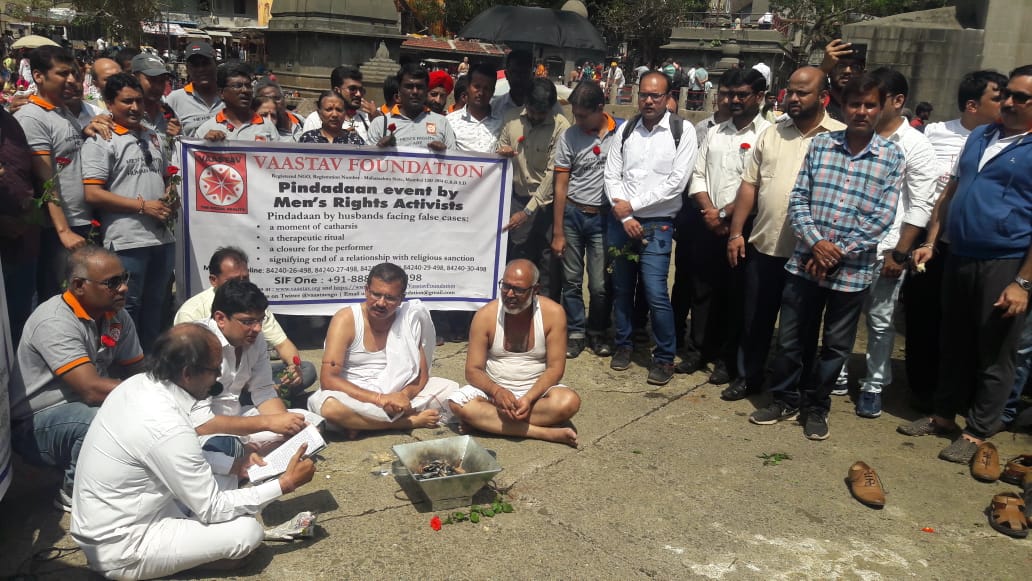 Satish Gupta (below), who got his mundan (shaving the head) done, lost his mother before his marriage. However, his wife filed a case of Dowry and Domestic violence against his dead mother whom she had never met.

Last year, Trupti Desai had raised objections over this practice, calling it a PR stunt. She had also asked the activists to approach government if they had issues with the present laws. However, Desai seems to be disconnected far from reality that in a country like India, where all men have been painted with the patriarchal brush, demanding equal rights and laws for this gender will remain a distinct dream.

Many would mock, laugh and ridicule this movement since they are the one’s who only consider women as victims. Often an argument is made that the number of men sufferers are far less in numbers than the women sufferers. However, every single person who is associated with the Men’s Rights Movement can vouch for the trauma towards them and their family, which is the other end of the tunnel. 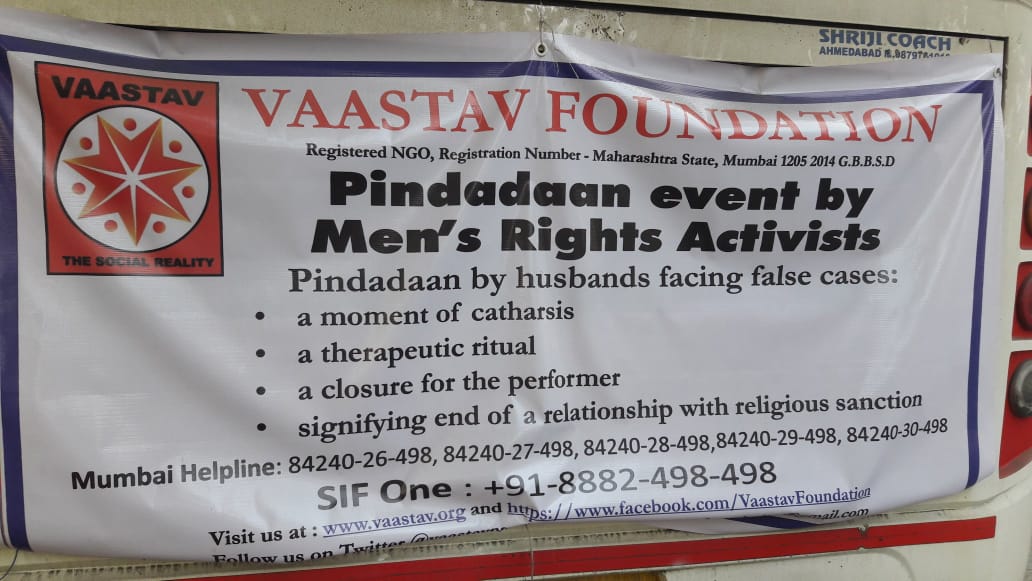 You may follow some of the below posts for more images of yesterday’s event:

Team @vaastavngo @SIFKtka & @DaamanNGO performing #PindDaan across nation to demolish #GenderBiasedLaws from our society.
This puja is to end the #FeminismPisachini, which professes equality but seeks female dominance, entitlements and privileges without any responsibilities. pic.twitter.com/SnvsrtWXk9

The team after performing a symbolic #PindDaan of dead marital relationships…
It marked a moment of transition for men seeking liberation frm excruciatingly painful judicial process of proving themselves innocent in wake of misuse of gynocenteic laws agnst them#Ramkund #Nasik pic.twitter.com/ZLv0DRmoO2

Congratulations @SIFKtka for conducting #PishachiniMuktiPuja to remove #feministic carcinoma from our women & #Pinddaan of dead Rakshasi of #metooindia & #Feminism so as to not take rebirth and reach moksha in the global interest of family & Society at large. pic.twitter.com/64dLGiW1jy