by Team MDO
in ALIMONY, HIS STORY, IN THE NEWS, SPEAK UP MEN
0

In India, after a couple ties the knot, the daughter-in-law moves into the husband’s house to live with his family. While this has been enforced to be believed as a tradition and patriarchal, there are several practical factors as well, why a woman agrees to live with her in-laws family.

When a couple is about to begin their new journey, especially where only the man is earning, they are surely conscious of their income and savings. Below are some of the reasons, why a woman initially affirms to live in a joint family :

Some may feel the above pointers are too harsh on women, however, these are workable ground realities which we see in several marriages and surely it does not demean the wife if she gives her nod to live with in-laws. The complication arises when she agrees to live jointly, however, within a few months, pressurises the husband to move out of his parental home by taking his share of property.

Such is the case of Amit Kumar, who originally hails from Bihar, now working in Hyderabad, and is undergoing mental as well as physical trauma, due to unreasonable demands by wife, supported by lopsided women centric laws. 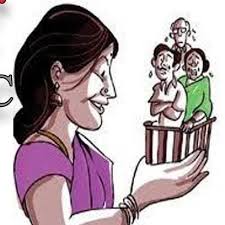 Cases like these, strongly echo the demand of a pre-nuptial agreement in India, else such personal matters which can be highly subjective in the eyes of judiciary, will never see the fate of justice, especially for the man who will end up paying the woman for a lifetime without access and rights over his own child.

DISCLAIMER | Names have been changed since the case is ongoing