Indore-based Computer Science engineering graduates Akshay Chouhan (26) and Kapil Karda (25) are school friends from Indore who have a unique claim to fame!

Kapil and Akshay have started up twice in four years, and running both companies successfully. Even though four years is not a long time, it hasn’t been an overnight success for the duo. Since their childhood, they nurtured a dream of having their own business.

How It All Started?

Friends since childhood, Akshay and Kapil hail from middle class families. When the two of them were in their 7th Grade, they started selling Rakhis and other festive goods seasonally. When they reached their high school, they also delivered newspapers and gave tutions to other kids to be able to save up some money. With this money they paid their college tuition fees. Having keen interest in learning new things, they also acquired knowledge about printing marketing material, newspaper printing and vendor models. In their detailed interview with YourStory, Kapil shares how it all started for them,

We went to a local engineering college. We joined an IT startup for an unpaid internship to learn about software and website development in our first year. For four years, we attended only half day at college with permission from authorities.

After Akshay and Kapil graduated, they worked in a couple of IT startups, namely EngineerBabu and JSM Infosoft respectively. However, after a year, the duo decided to start up on their own.

With a few savings in hand, the boys launched their very first venture called “EngineerMaster” in 2015. Initially they rented out an apartment in Indore where they slogged for nearly 22 hours a day.

Both Akshay and Kapil are thankful to their family for backing and supporting them for leaving their stable jobs and embracing entrepreneurship. They were given a free hand to try their venture out for six months and see if it is working well, however, the duo was lucky to have tasted profits from first month itself. 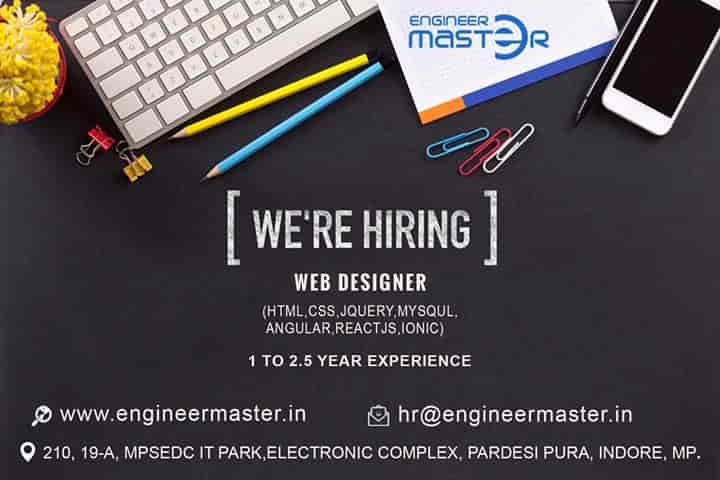 All About Engineer Master

Engineer Master mostly targets startups. Charges are tailored as per their product development and there are different prices for different concepts. The services they provide include website development, website designing, CRM development, ERP development, mobile applications, and digital marketing.

The company hired freshers and trained them in order to minimise cash burn.

We have to work closely with every fresher to deliver a pixel-perfect project. It took some extra time and effort, but we are able to deliver, says Kapil.

The company has so far delivered more than 1,000 projects in four years. With a team of nearly 50 employees, the start up is working with about 200 overseas businesses and clients.

Engineer Masters is proud to include some well-known brands of clients such as Samsung and Airtel. The co-founders claim that the company is now worth Rs 4 crore.

Kapil feels Indore stories do not get enough media attention and also the investors are reluctant to invest. The budding entrepreneurs had tried their hands at a content website in Hindi and English, however, had to shut down due to lack of capital. Although today times are different and there are more than 300 startups already listed in Indore.

After completing two years with their web development venture, the duo decided to try their hand at Consumer Internet Sector along with E-Commerce. Raising funds through a  personal loan from a bank along with hiring one more person, they launched MahakaalStore.com in February 2017 as an online retail store for customised mobile covers, keychains and t-shirts. Kapil says,

We started Mahakaal Store to print t-shirts, mobile covers, and keychains. But following customer demand, we started customising it. We named our venture Mahakaal because as we believe in Mahakaal (Hindu deity Shiv). Most of our orders come from rural areas.

When it comes to customising t-shirts, Mahakaal’s competitors include Alma Mater, Tees Hood, Vista Print, and Print Land. Mahakaal’s products are priced between Rs 49 to Rs 179. Kapil claims their average ticket size is Rs 100, and they have a margin of 40-60 percent. The portal accepts only online payments.

Marketing And Logistics For Mahakaal

As every new start up goes through a cash crunch, Mahakaal Store’s promotion was done via influencer marketing. They source cotton fabrics from Ludhiana and the t-shirts are manufactured from a local vendor. They customise the t-shirts with in-house printing machines. Logistics is managed through third-party courier companies and India Post. Mahakaal brand claims to earn anything between Rs 2-3 lakh, and the monthly growth rate is 30-40 percent. They make 15-20 percent profit on each item.

During this fiscal, Engineer Master hopes to setup office in at least two foreign countries to get clients. They will also expand to at least two cities in India, either Pune, Bengaluru or Noida, to target local market.

On a parting note, Kapil says, both Mahakaal and Engineer Master are self-funded. As of now they have no plan to raise external funding.

We believe in earning money from our clients, and not by any investor.