Delhi Girl Dressed Up As A Man, Teamed Up With Boyfriend To Make Easy Money

by Team MDO
in CRIME HAS NO GENDER, IN THE NEWS
1

Delhi Girl Dresses As A Man To Snatch And Steal; Duo Arrested By Delhi Police

Crime has no gender! The below case from Delhi proves this yet again.

A 22-year-old girl started dressing up as a man and teamed up with her boyfriend after all their source of money dried up. The duo roamed around in the streets of West Delhi, while the woman snatched expensive mobile phones and stole motorcycles, which were later disposed off in grey market. In a short span of time, the accused managed to execute more than 20 snatching before they were nabbed by Delhi police. 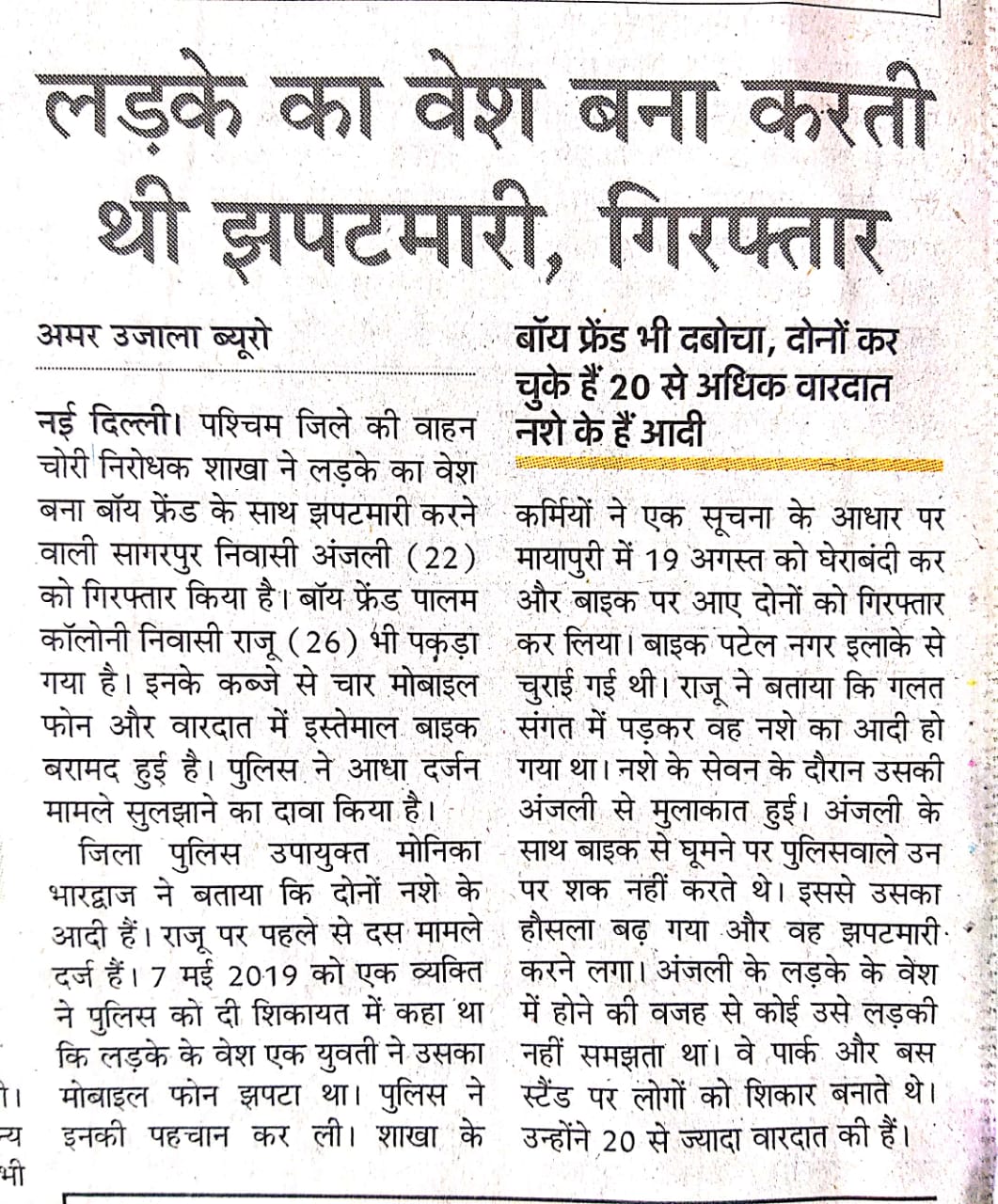 Monika Bhardwaj, DCP West, said that the accused couple were identified as Raju (26) and Anjali (22). The police was alerted about this planned snatching, after a complaint had been registered at Mayapuri police station about two people on a motorcycle snatching a man’s iphone.

When the CCTVs of the area were scanned by the local police, the complainant identified this duo as the one’s who had snatched his mobile phone. The officers then circulated these images amongst local informers for identification and tracing. On Monday, the police was tipped off that the couple will be visiting Kundal Lal Chowk in Mayapuri and this is when a trap was laid for them.

Initially Raju was caught and arrested from the reported spot, while Anjani was picked up later after receiving information of her whereabouts from the boy. The police recovered four mobile phones and a black motorcycle from them.

Both the boy and girl were drug addicts and when they ran out of cash, they decided to team up and make a quick buck. However, Anjali claimed that she had joined Raju only recently in the acts. She also confirmed that she used to dress up like a man to hide her real identity.

Identified through this CCTV grab, Raju and Anjali have been arrested by AATS/ west with 4 snatched mobiles. The bike they were using has also been found stolen from Patel Nagar.

Identified through this CCTV grab, Raju and Anjali have been arrested by AATS/ west with 4 snatched mobiles. The bike they were using has also been found stolen from Patel Nagar. #ShantiSewaNyay @LtGovDelhi @DelhiPolice pic.twitter.com/OsHy64xZat

These incidents reported must remind the society that anyone can be a thief or a murderer or a criminal and the same should not be looked at through the lens of any one particular gender only.